GEHRIMED is an electronic health record software solution designed to improve clinical documentation and compliance, clinician productivity, and patient care. This integration is designed to close one of the most significant information communication gaps in your facility and make it easier for your GEHRIMED practitioners to work efficiently as they care for your patients.

This guide is for GEHRIMED clinicians who work at your facility that want to connect their notes software with PointClickCare. Once integrated, clinicians will be able to do the following:

Submit the Integration Activation application from within PointClickCare.

Once both the PCC and GEHRIMED customers are aligned on integrating their EHRs, follow these steps to submit the application from within PCC

Q: What data is currently being shared in this integration?

A: Functionality currently includes ability for the GEHRIMED user to import ACTIVE PointClickCare patients' demographics including Name, Room/Floor, DOB/Age, Gender, Language, Address, Facility Phone Number + Insurance (primary, secondary & tertiary) along with the ability to pull Medications & Allergies into GEHRIMED encounters in an Unstructured format. Historical encounter note content can be sent to PCC on linked patients and newly signed encounter content will be sent to PCC upon signature. This video demo reviews the basic functionality.

Meanwhile, informational insurances are not imported from PointClickCare to GEHRIMED. 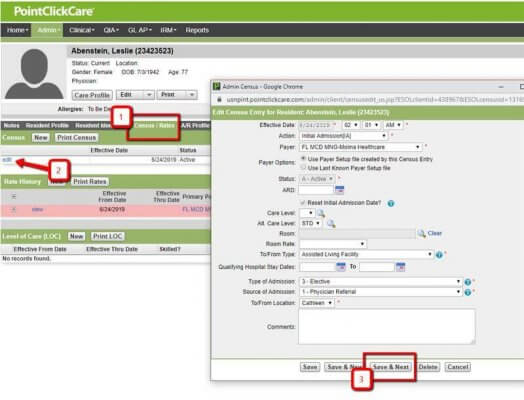 The Medicare HIC # comes over in policy number along with payer address. See screenshots below from a test patient:

Imported Patient
Q: Will the user's PCC account need to be modified to support the integration with GEHRIMED?

Q: Where do the encounters from GEHRIMED populate in PCC?

A: Upon signature of a GEHRIMED encounter on a PCC linked patient, notes are added to the delivery queue, sent every 5 minutes. Encounters sent through the queue successfully, deliver the encounter content to PCC as a 'External Encounter Note' in the the Progress Note section of the patient's PCC record (under a new ‘External Encounter Notes’ tab) 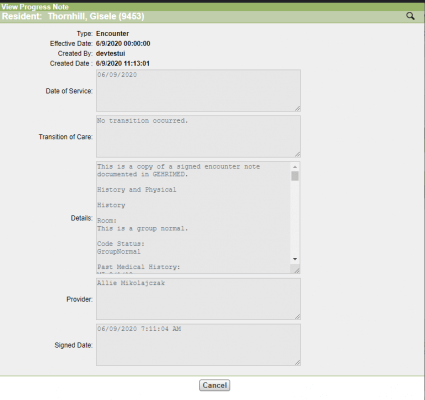 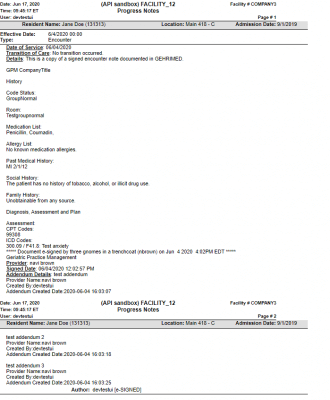 If the facility is not seeing encounters cross into PCC, the GEHRIMED patient may not be linked to the PointClickCare patient record. This brief demo video explains how to complete this process.

Q: A representative with the facility network already submitted the integration application but was denied by GEHRIMED. Why??

A: Your facility’s application was likely rejected if we did not have any interested GEHRIMED customer on file requesting the integration (See Step 1 above).

Q: Does the facility pay GEHRIMED for this integration?

No, GEHRIMED does not charge the facility to integrate with us. Facilities must have a prerequisite ‘integration package’ with PCC, and we understand this is required for the facility to connect with any 3rd party applications in the PCC marketplace.